Yes, kid, you do rock me like a hurricane.

It has been snowing like crazy here this week. The upside is I have worked from home for three days without any of the guilt I normally feel when I stay in my pajamas all day. The downside is that, as I have blogged before, snow makes the people here become complete freakin' idiots before the first flake hits the ground. I went to get my coffee this morning and it was like entering the Seventh Circle of Hell. You know the Circle I am talking about - it's the one where Musak and Chuck E. Cheese were invented.

Speaking of complete freakin' idiots and Hell we have these neighbors (who Eric and I lovingly refer to as the Clampetts) renting a house in our cul-de-sac and I hate them. HATE....THEM....with something close to a burning passion. These people push all my buttons. Some of them more than once. They have a constant party going on. Constant. To add insult to injury their parties are like a redneck convention with lots of big 4X4s and shouting on the front lawn at 3 am. Every now and then you get a faint "Yee-Haw" or a "Get along little doggies." I don't even want to know what they are up to because I am not sure my fragile psyche could take it.

There are never fewer than 5 cars and they park end-to-end out to the center of the cul-de-sac. IT.MAKES.ME.CRAZY. A good portion of the time they are even parked in front of my house and even though I don't actually own the street I OWN the street because it is in front of MY house that I BOUGHT and therefore it is mine so just back the f*ck up you sucky renter bee-otches. Drew isn't quite dexterous enough to play Guitar Hero, but that doesn't stop him from unleashing his inner rock star. I know these pictures are cute and all, but I have to point out that at the time these were taken Drew had been singing two lines from "Rock You Like a Hurricane" for about an hour straight. He only knows two lines so he just repeats them over and over and over. He does shake it up a bit though. Sometimes it is: "HERE I am. Rock you like a hurriCANE."

And the next time: "Here I am. ROCK you like a HURricane."

And then: "Here I am. Rock YOU like a hurricane."

Sometimes he is loud. Sometimes he is on key. Sometimes he is just shouting at the top of his lungs. But, no matter how he is singing it he has that crazy guitar and he is working the crowd like a pro. Granted - Eric and I are generally the "crowd" and we are only half listening because we have been listening to it for HOURS, but he doesn't care. I think the kid has a future in show business. 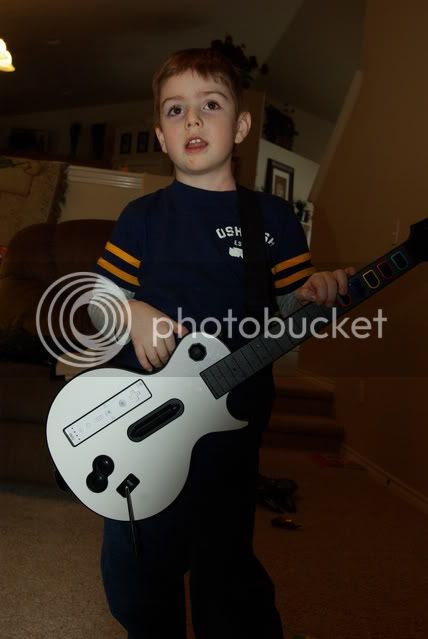