My own personal mid-life crisis

Man - it feels like I have been gone forever! I logged in tonight and it was hard to see through the dust and cobwebs.

The last few weeks have been very bizarre. As you know, I got laid off a couple of weeks ago and in an amazing turnaround I received a job offer 5 days later. A good job with a great company. It has been quite an adjustment though. I forgot that some companies actually expect you to work during "normal business hours." Really? Normal? Business hours? Me? Oh - and they have a dress code. An REAL dress code. Not the whole "cover the fun parts" code I am used to.

I know what you're thinking and trust me...those were my thoughts exactly. I don't do well with that whole assimilate thing.

I started the new "job with a schedule and dress code" on Monday. I kid you not...I have had to completely reorganize my entire existence. I used to be able to stay up late (usually working) and then sleep in a bit and get up and make lunches and take Drew to school and then get coffee and go to work. I got to pick Drew up from school and schedule appointments during the day and go to all his little school events and generally do what I wanted so long as I got my job done and I ALWAYS got my job done.

I got to wear jeans and baseball caps and sweatshirts and flipflops. Getting ready in the morning took me about 10 minutes and that included a shower. On ball cap days I could wake up and get Drew and I out the door in less time than it takes to boil an egg.

Anyway, now that I have to be all respectable and such my evening schedule goes something like this:

Make dinner (I am sure that in some cultures ordering pizza counts as making dinner?)
Give Drew a bath (Does putting him in a tub of warm water and telling him to bathe himself and hoping he actually does it while I lay on my bed and pretend I am independently wealthy and living in Fiji count as giving a bath?)
Pack lunches (Yes. Putting a lunchable in his lunch box does, in fact, count as packing lunches.)
Put Drew to bed (This generally includes lots of tears and temper tantrums and screaming downstairs for water and snacks. Drew gets pretty fussy, too.)
Lay out clothes for next day (This gives me at least two additional snooze button slaps. Um...seriously? Totally worth it.)

After that I will hop on my laptop and work on some contract work I am doing on the side, work on building my Scentsy biz, work on stuff for the two different boards I am on, study for my upcoming PHR exam, read a bit, catch up on my overworked, overwhelmed TiVo and generally stay up too late to get a decent night sleep thus necessinating the over-usage of the snooze button.

I feel like an actual MOM now. You know. MOM. A science project completing, carpool driving, cookie baking MOM. It's weird. I think I may be having a mid-life crisis. I am considering dying my hair blonde, getting a boob job and piercing my navel. At the very least I think I am required to buy low cut jeans and pointy boots.

I need a job before the serious wallowing starts.

I got laid off last week. Yes. It sucks. I have spent this week trying to keep myself busy so that I don't wallow in self pity. Ok. I wallowed for a little bit, but not quite long enough to enter into not showering, wearing disgusting sweats and watching soap operas territory. I suppose I am not the best wallower. If I don't find a job I will likely improve my skills. I'll keep you posted. Hell, if I wallow myself into not showering, stinky sweats territory I might just post a picture for you. Don't say I don't know how to keep my readers coming back.

I am just ready for the weekend. Eric doesn't have to work and I think we are going to head out to the corn maze. This year's maze is the faces of McCain and Obama. I plan to stomp my way through the Obama face. Aggressively. You know? I might even take my dog so that she can pee on him. My own little passive-aggressive political statement.

We also have two hockey games on Sunday so I am looking forward to that. We are full swing into hockey season and it really is a great time of year. Eric plays on two teams with two leagues so he has games twice a week, sometimes more. Then we have the Colorado Avalanche games and that can always be counted on to have us both hopping around the living room screaming at the television, cussing the referees, heckling the opposing team's players and generally making complete asses of ourselves. Yes. That is correct. During Avs games Drew becomes the most mature person in the house.

Oh yeah - last Friday Drew tested for his yellow belt in Tae-kwan-do. He did such an awesome job and he was so proud of himself! Here are some pictures to prove it. It also snowed. In October. On October 10 to be exact. This picture, while really NOT attractive, does prove the presence of snow. And not just a few flakes mixed in with a bit of rain. Nope. Not here. Not in the Most Freakin' Bizarre Weather Patterns Ever capital of the world. Here? We get big, fat, fluffy snow. 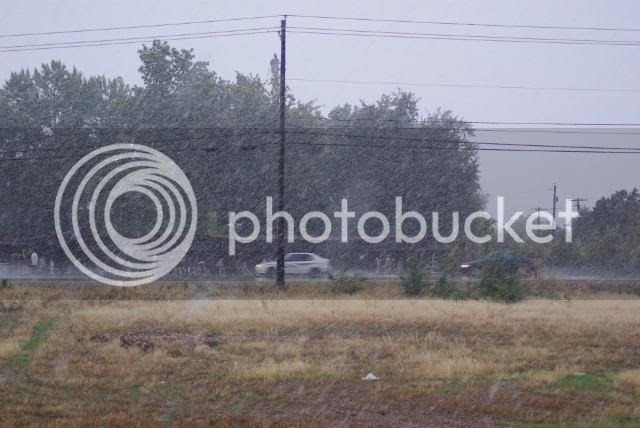 Sleeping in the circus

I have had a couple of utterly miserable days and it seems my fuse is shorter than normal. By the time I picked Drew up from school today I was wound so tight that I was literally sick to my stomach. I have not been sleeping for the last week or so and when I am averaging about 3 hours of sleep a night it makes normal stuff difficult. Throw anything extra on my plate and...well...let's just say I don't deal well with things. Not even good things. The good things make me feel weepy and weepy is worse than homicidal in my book.

After picking up Drew I headed straight to Barnes and Noble. It's sort of like my mother ship and I always feel better when I am there. Some days I just go and gather up a bunch of books I want to read, but would never spend actual money on. Then I get a cup of coffee and sit in the cafe and read them for free. I know. I'm a sneaky bitch.

Anyway, after a quick stop at the bookstore I headed straight for Starbucks. What can I say. Coffee is my drug of choice and I am convinced that an Iced Quad Venti Vanilla Latte will solve the world's problems.

Anyway...I waited TWENTY MINUTES for them to make my coffee.

Seriously? It's a cup of freaking coffee. I've known of relationships that take less time.

When I got to the drive-thru window I snarled, "I have never waited so long for coffee in my life. I could have split my DNA and created my own coffee beans by now. What the hell..."

To which the entirely too perky barista replied, "We got new machines and they are slower than the old ones." Then she handed me my coffee.

My reply? "Seems to me you should have kept the old ones because THIS? Not an improvement. Juan Valdez's donkey could have made my coffee faster than you."

She didn't look all that perky after that. I, however, felt a bit better. Sort of like when you have the flu and you are nauseated so you go throw up. You know you aren't actually better, but for a few minutes you aren't nauseated. I purged a bit of my absolute furiousness at the universe and for a brief moment the world only sucked a lot.

After going to Drew's karate class we went to the grocery store to pick up a prescription and Drew was being pretty rowdy. Me? Not coping. Not. Even. A. Little. So I told him, "Drew. I swear on all that is Transformer related if you don't settle down and stop stripping me of my sanity I am going to sell you to the circus."

Drew very calmly looked at me and asked, "Where would I sleep if you sold me to the circus?"

The pharmacist piped up, "You'd have to sleep with the clowns."

Drew looked at her like she just told him he would have to hang from his intestines from the top of the ferris wheel so in an effort to squelch a bit of the clown generated terror I said, "You would sleep with the elephants."

Drew looks at me. He looks at the pharmacist. Then he says, "Elephants are big, Mom. BIG. No...I want to sleep with the TIGERS."

That's my boy. He's all about the predators.
Posted by Jayna Shaye at 9:19 PM No comments: